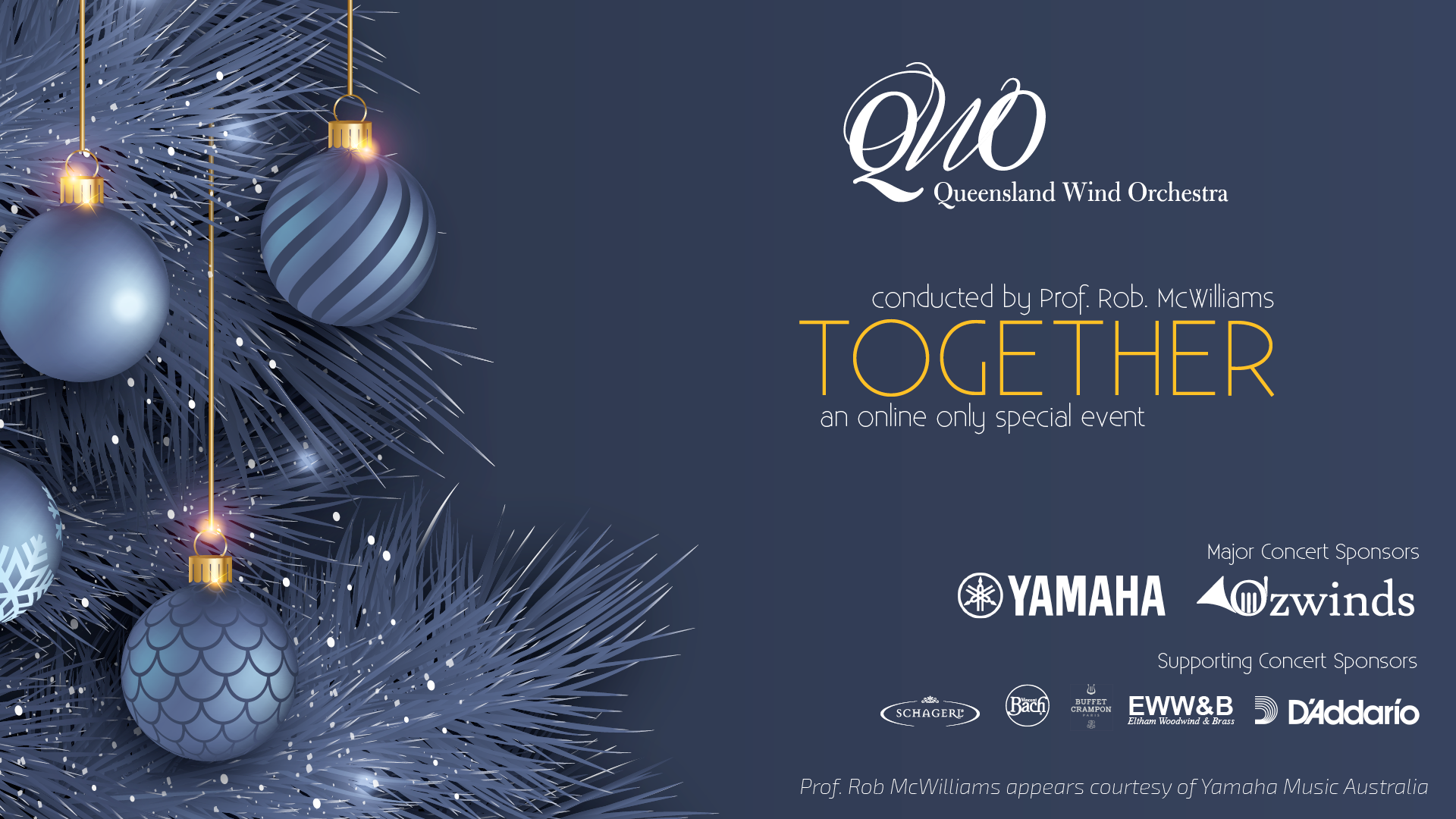 Programme notes available here as we perform, or below.

The end of year season is a time when we all take a break, and spend time to laugh, dance, eat, and be with friends and family. With restrictions in Queensland easing, we too can be together for the first and last time of 2020 - albeit in an online only format.

Conducted by Prof. Rob McWilliams (supported by Yamaha Music Australia), MCd by David Law, and generously supported by our major concert sponsors Yamaha Music Australia and Ozwinds, and supporting sponsors D'Addario Australia, Buffet Crampon, Bach Stradivarius, Schagerl, and Eltham Woodwind and Brass, the Queensland Wind Orchestra will be performing for you a program of joyous music, livestreamed via BrassBanned from The Old Museum Concert Hall online into your living room. Return to this page at 7pm on 19 December to begin, and follow our instagram @thequeenslandwindorchestra to receive real-time programme notes. Our only live concert of 2020 is available to you online for free: our gift to you.

We’re made up of university music students and music teachers, as well as others who have gone on to careers in fields such as health, science, engineering, information technology, marketing, communications, and many more. Our players are brought together by a desire to develop their individual and ensemble playing skills, to enjoy the company of like-minded musicians, and to play great music with a fantastic ensemble.

We’re excited to have you join us online tonight. 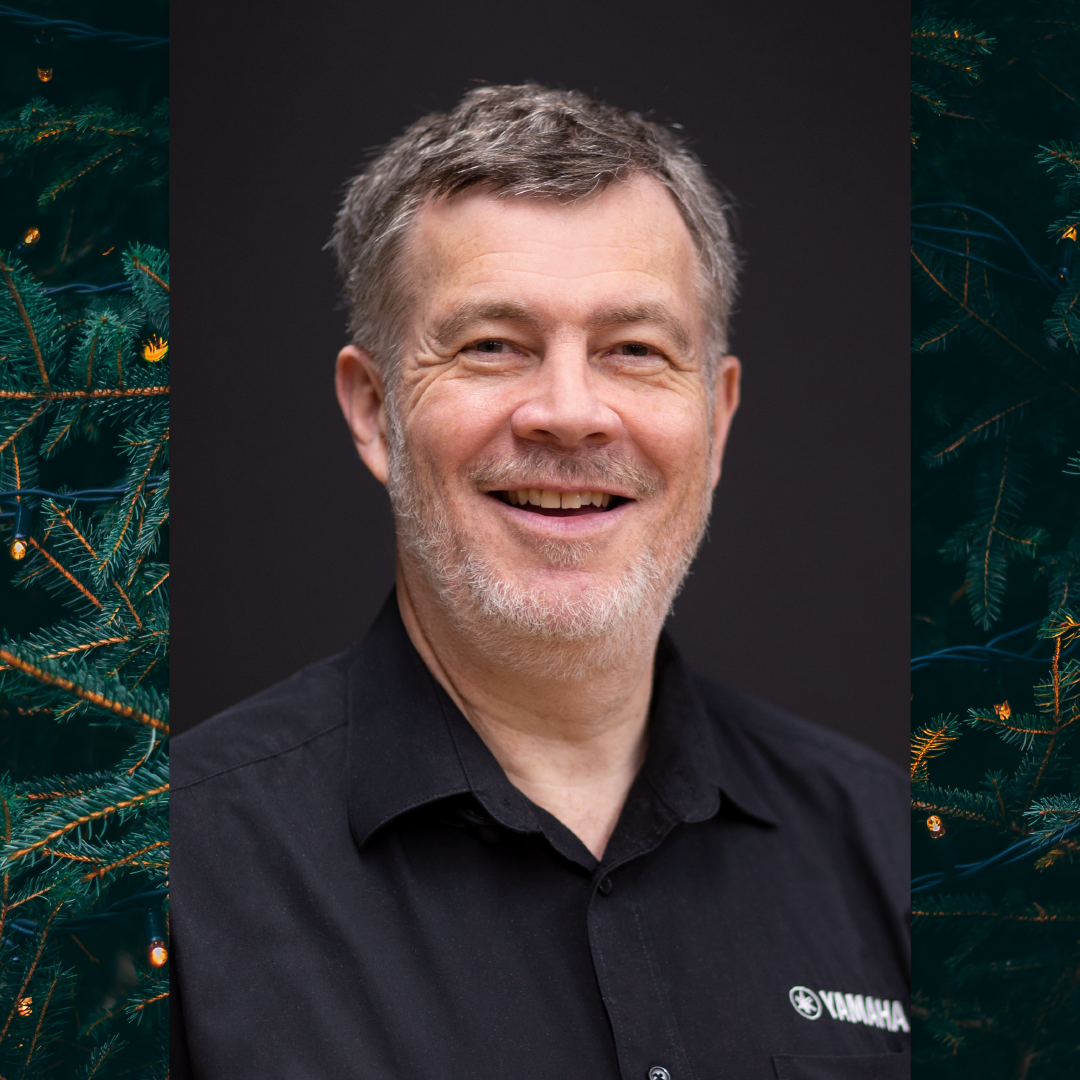 As a guest conductor and musician, Dr. McWilliams has travelled and worked extensively with groups at all levels. In the USA he worked with ensembles at the national, state, and regional levels and served as guest conductor and clinician in Alabama, Minnesota, Wisconsin, Florida, Georgia, North Dakota, Ohio, Iowa, Kentucky, Tennessee, and Utah. Prof. McWilliams also served as the founding Artistic Director and Conductor for the Wisconsin Symphonic Winds, an advanced adult group comprising the best professional and semi-professional players in the Fox Valley region of Wisconsin. Prof. McWilliams has also conducted and presented at major music conferences in all states of Australia and internationally in Hong Kong, the United Kingdom, Singapore, Europe, and China including performances at the Japan Band Clinic and conferences of the World Association of Symphonic Bands & Ensembles (W.A.S.B.E) in Manchester, England and Hamamatsu, Japan. He was a member of the faculties for the Bonyi International Youth Music Festival in Brisbane in 2007 and the Tutti International Festival in Beijing, China in 2011 and 2013, and was the Artistic Director for Tutti 2019. He has also served as an invited conducting clinician for the Singapore Ministry of Education. In addition to ensemble direction, he has extensive professional performing experience on trumpet and keyboard with numerous symphonic, brass, and jazz ensembles.

Prof. McWilliams has been published in the Journal of Band Research, Teaching Music Through Performance in Band and is a published composer/arranger with Alfred’s Music. In early 2015 he relocated to Brisbane, and currently works for Yamaha Music Australia as their Educational Outreach Clinician and freelances as a musician, educator, conductor, adjudicator, and composer/arranger.

C’est Noël, a French-Canadian Christmas Celebration, is a joyous arrangement of three traditional Christmas songs known throughout Canada and America. Arranger Andre Jutras is a former English horn player with the Quebec Symphonic Orchestra and currently the music officer for the Canada Council for the Arts.

The piece begins with a brilliant introduction based on “Je est Ne’ le Divin Enfant” (He Is Born the Holy Child). The andante middle section features a sonorous brass choir performing Silent Night, and ends with a joyous rendition of Angels We Have Heard on High. “Joy to the World” is also cleverly used as a woodwind counterpoint.

It is generally agreed that the melody we know as Greensleeves is probably the second oldest piece of secular music in our Western culture, its origins having been traced back to about 1360. While we are not certain this was the original title, it is known that in the latter 14th century, English ladies wore gowns with great billowing sleeves, and the lyrics that have come down to us speak of a lover’s lament over his lady’s cruel treatment of him by a lady clad in a dress of green sleeves.

By the time of William Shakespeare, this song had already become a classic and he made use of it in two of his plays, most notably in the Merry Wives of Windsor. Over 300 years later, the English composer Ralph Vaughan Williams used this melody as an intermezzo between two acts of his opera “Sir John in Love,” which was based on the same play. Since then the tune has been adapted as the basis for at least one Christmas carol (What Child Is This?), several popular songs, and even by the Swingle Singers on one of their albums. In addition, it has been performed instrumentally by groups of all sizes and styles from full symphony orchestra to small jazz and rock groups.

This arrangement by Alfred Reed is a symphonic development of this 600-year-old classic melody adapted for the full resources of the modern wind orchestra or concert band.

The Holly and the Ivy - arr. Tom Wallace

American composer and arranger Tom Wallace is well known as a creative arranger for wind band and marching band with many titles in his portfolio. He is especially known for colourful and creative settings of holiday themes and related tunes.

The Holly & the Ivy is a contemporary setting of the traditional British carol and produces some wonderful holiday moments with fleeting rhythmic patterns combined with light touches of jazz-influenced writing.

John Zdechlik (1937–2020) was born in Minneapolis, Minnesota. He was an American composer, conductor, performer and clinician. Zdechlik had musical influences growing up — his grandfather was a church organist, his father regularly played recordings of Beethoven and Victor Herbert, and his parents enrolled him in piano lessons at age six. In high school, Zdechlik began playing E-flat alto horn before switching to trumpet. Dr. Zdechlik earned his Ph.D. in theory and composition from the University of Minnesota, where he studied with Paul Fetler and Frank Bencriscutto for whom Zdechlik served as assistant for several years.

Chorale and Shaker Dance was commissioned by the Bloomington (Minnesota) Jefferson High School Band. However, the community-based Medalist Concert Band, also of Bloomington, premiered the work in March 1972 at the Music Educators National Convention, with the composer conducting. The work combines an original chorale tune and the traditional Shaker song “The Gift to Be Simple.” Zdechlik transforms, varies, and juxtaposes both themes throughout the entire composition, incorporating intricate counterpoint and jazz-influenced syncopated rhythms. The Shaker melody does not appear in its entirety until near the end of the piece, when the trumpet section plays the tune over a flurry of activity in the upper woodwinds and a sonorous low-brass accompaniment. A short allegro section follows, and the work draws to a close with several dissonant whole notes that resolve into a brilliant D major chord.

Roger Cichy (b. 1956, Columbus, Ohio) has a diverse background as both a composer/arranger and a music educator. Roger holds Bachelor of Music and Master of Arts in Music Education degrees from The Ohio State University. Although both are in the area of music education, he studied composition and arranging as a second area of concentration during both degree programs. As a freelance composer and arranger, Roger writes for high school and college bands, professional orchestras, and the commercial music industry. He has over 275 compositions and arrangements accredited to his name.

Colours is an impressionistic work with each of the six movements of the piece representing a particular colour. Composed in early 1997, Colours was commissioned by the Kansas State University Bands and premiered on May 10, 1997, with the composer conducting. The music of each movement is not based so much on the outward appearance of its colour, but rather the pigments that are combined to produce the particular colour. Taken one step further, the colour of each pigment is translated into its symbolic meaning, which is then represented through the music (i.e., green: warm, organic, middling qualities, immortality, neutrality). The musical “pigments” are blended into the composition of each movement to create the impression of the colour. Therefore, the work represents the association of colour symbolism as interpreted through music as opposed to “orchestra colours,” or timbres. Obviously, the whole matter of colour symbolism is highly subjective. The particular colours that each movement represents were chosen by the composer because of their contrast to one another.

Considered one of the world’s most popular Christmas carols, Stille Nacht was first sung in Austria on Christmas Eve 1818. The melody was composed by Franz Xaver Grüber (1787–1863). The words came from the pen of pastor Joseph Franz Mohr (1792–1848). The first known performance of Stille Nacht in the United States took place near New York City’s Trinity Church. In 1839 the Rainer family singers of Austria included the German version in their repertoire during an appearance at the Alexander Hamilton Monument near the church, some 24 years before an English version of the carol would be published.

Alfred Reed (1921–2005) was born in New York and began his formal music training at the age of ten. During World War II, he served in the 529th Army Air Force Band after which he attended the Juilliard School of Music, studying under Vittorio Giannini, after which he was staff composer and arranger first for NBC, then for ABC. In 1953, he became the conductor of the Baylor Symphony Orchestra at Baylor University, where he received his B.M. in 1955 and his M.M. in 1956. He was a prolific composer and travelled extensively as a guest artist and lecturer throughout his career.

Reed was commissioned to write a piece of “Russian music” for a concert in Denver, Colorado in 1944. The concert’s aim was to improve Soviet-American relations; as such, it was to include premieres of new Soviet and American works. Prokofiev’s March, Op. 99 was supposed to be the Russian work, but it was discovered that the work had already been performed in the United States, so Reed was assigned to write a new piece a mere sixteen days before the concert. The piece was first performed on December 12, 1944, on nationally broadcast NBC radio. Since then it has become a frequently performed staple of the wind band repertoire.

Although Russian Christmas Music consists of only one movement, it can be readily divided into four sections:

As it was written to convey the sounds of Eastern Orthodox liturgical music, which uses the human voice exclusively, the entire piece draws its primary inspiration from a very lyrical and singing quality.

Thank you for joining us! We hope you have a fantastic holiday season, and look forward to performing for you, in person, in 2021.